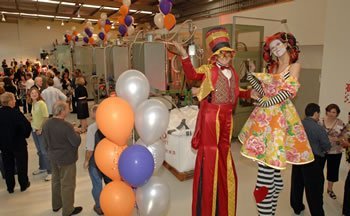 To celebrate 10 years of success LinkPlas held a birthday party on Friday night 9th November. The party, which was held in the their factory had a definite circus theme. Stilt-walkers and clowns mixed with over 150 customers, suppliers and staff to mark the occasion. Together with the Roger Fox Band with circus music and some ingenious lighting, the sparkling factory became a "Big Top" for the night!

achinery makers that have supplied LinkPlas with all their machines. Mr Aoki flew to Auckland especially for this function to present Steve Morrison, managing director of LinkPlas, with an amazing Farmer's Art – wood carving of Shinsyu (Nagano) depicting an annual celebration of 100 soldiers defeating 1000 soldiers at Ueda castle hundreds of years ago.

LinkPlas had it's latest high speed machine in place for the party, commissioned the day before the big party this new machine will be used for future expansion and to increase production capacity.

In the words of MD, Steve Morrison "we have had huge success over the past 10 years – what is next? Watch this space!"